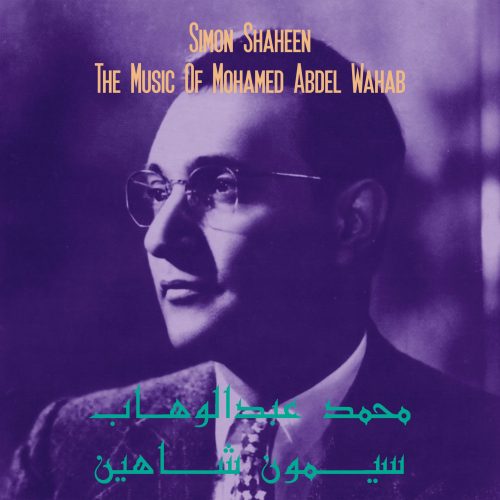 Reissue of the oud / viola virtuoso SIMON SHAHEEN’s interpretations of pieces by one of the Middle East`s most important 20th Century composers, MOHAMED ABDEL WAHAB.
Produced by BILL LASWELL, remastered for vinyl at D&M Berlin.

MOHAMED ABDEL WAHAB (1902-1991) was „a giant in the world of Middle Eastern entertainment” (Al Jadid Magazine) – as singer, actor and composer – and is commonly considered “the father of modern Egyptian song”. After a visit to Paris, he revolutionized the film industry by introducing the genre “musical film” to the Arabic world, the movie “The White Rose” in which he starred broke all records and to this day is frequently presented in Cairo’s cinemas. But in 1950,
WAHAB left the film industry to focus on singing and composing – he wrote over 1800 songs (among others for Umm Kalthoum, an iconic artist in the Arabic music in her own right) that were deeply rooted in classical Arabic music but also laid the foundation for a new era of Egyptian music as WAHAB was open to Western elements such as waltz rhythms or even rock’n’roll in Abdel Halim Hafez’s song „Ya Albi Ya Khali“. He also composed several national anthems (Tunisia, Oman, Libya, United Arabic Emirates) and re-composed the Egyptian national anthem “Belady Belady Belady”, based on the original by Sayed Darwish. WAHAB received several decorations of Arabic states, and at his death in 1991, Egypt honored its famous son with a huge military funeral at the Rabia al-Adawiya Mosque in Cairo, the six-horse carriage procession carrying his coffin was actually led by the prime and foreign ministers, followed by the ministers of defense, interior and culture!

SIMON SHAHEEN (born 1955) is the perfect choice for WAHAB’s compositions. Born into a family of gifted musicians, he learned playing the oud at the age of 5 and the violin shortly thereafter. He earned degrees in Arabic literature and music performance at the Tel Aviv University, and later pursued further studies at Hebrew University of Jerusalem and after his emigration to the USA (in 1980) at the Manhattan School of Music and Columbia University. SHAHEEN lives in New York where he founded the Near Eastern Music Ensemble and Qantara, a formation that blends traditional Arabic Music with elements of Jazz and classical music, and he also has been organizing the Annual Arab Festival of Arts called Mahrajan al-Fan since 1994. The same year he received a National Heritage Fellowship from the National Endowment for the Arts at the White House. Solo albums like Saltanah (Water Lily Acoustics), Turath (CMP) or Taqasim (Lyrichord) underline his importance as one of the most significant Arab musicians, performers, and composers of his generation. His work incorporates and reflects a legacy of Arabic music, while it forges ahead to new frontiers, embracing many different styles in the process. SHAHEEN has participated in many cross-cultural musical projects with artists as diverse as Henry Threadgill, Vishwa Mohan Bhatt, or the Jewish klezmer ensemble The Klezmatics, contributed to the soundtracks for The Sheltering Sky and Malcolm X and composed the entire score for the United Nations sponsored documentary, For Everyone Everywhere, celebrating the 50th anniversary of the United Nations Human Rights Charter. SHAHEEN’s biggest success was the Qantara album Blue Flame (2001) which has been nominated for eleven Grammy Awards.

Besides all his activities as performer, he dedicates a good part of his time to working with schools nd universities, including Julliard, Columbia, Cornell, Princeton, Brown, Harvard, Yale, University of California in San Diego, University of Michigan in Ann Arbor and many others. The Music Of Mohamed Abdel Wahab was originally released in 1990 on Axiom, the record label
curated by iconic producer and bass player Bill Laswell, and has been carefully remastered for this vinyl reissue at D&M, Berlin.